Arcteryx's Therme and Camosun are their second and third warmest parkas coming after the warmest Thorsen. All these jackets are designed for walking around town when it's freezing out (line 24).

First I'll get to the bolts and nuts of Therme vs Camosun, and then move to who should consider getting a Thorsen and under what circumstances. 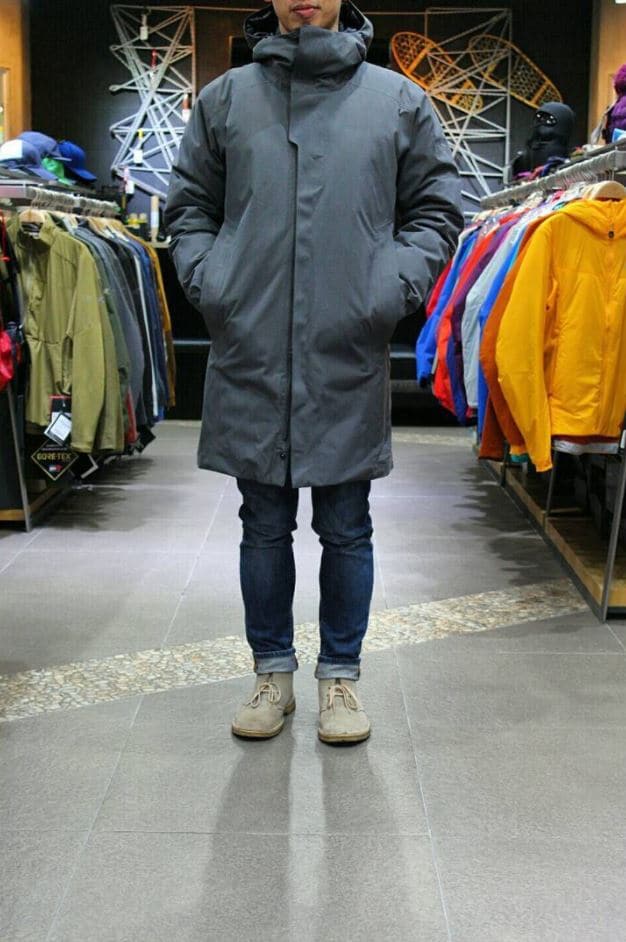 Arc'teryx Thorsen is extremely warm - meaning that it can even be too warm in some (many?) situations.

In summary, if you won't be out in below 15 deg F (-10 deg C) most of the time, then both Therme and Camosun would be warm enough - maybe also consider getting a good Arc'teryx fleece under like this one for more inclement days. You'd probably overheat inside the Thorsen at these temperature ranges, so consider it for lower ranges: around 5 deg F (-15 deg C) and below.

All 3 jackets use the same 750 fill power European goose down (which is top notch quality - read more about it here if you're curious).

However, the down amount varies (which is another major factor that determines jacket's warmth):

They're all equipped with Gore-Tex, so the wind is 100% blocked.

So what should you consider when getting either one of these jackets?

In other words, if you'll be in Milwaukee, Toronto, Chicago, Cleveland, Detroit, Boston, NYC, or any other similar temperature range city; then both Therme and Camosun would feel warm enough for around 90% of the winter.

For the remainder of the winter, you can easily use another simple fleece underneath either of these jackets. And I don't mean something high-quality like Arc'teryx either, even a t-shirt + hoody combo would work.

The difference is minimal, but not non-existent. If you feel fairly cold inside a Camosun, I'd doubt Therme would solve your warmth problems in the same setting. But still, there are things you'd better consider.

I put together the things you should consider regarding the warmth differences between these two jackets under 3 main subheadings.

Compared to Therme, the Camosun is going to be more restrictive when you're trying to layer due to its trimmer fit. It might feel less comfortable if you try layering with a bulky synthetic insulated jacket beneath, such as Atom AR. 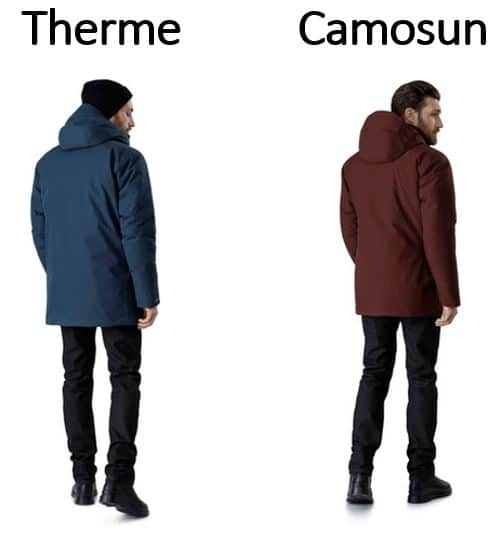 Part of the extra down in Therme (120 vs 105 grams) you see in the product specs results from Therme's 1.5 inch longer hemline. It naturally requires more down. It'll cover a larger portion of your hips - which can be especially important if you don't have or aren't planning to get insulated pants.

Also, even when you ignore the Therme's extra hem length, it still uses a little bit more down than the Camosun - hence a bit more warmth.

Baggier cut doesn't necessarily mean that it'll provide more insulation than a more snug cut in every situation. It's contextual and depends on many factors such as how baggy or snug the jackets are, their fill quality (fill power), lengths etc.

But in our case, Therme isn't too baggy to let the air circulate too much and hence let the cold air in. It doesn't use a lower quality fill either.

So, since more insulation is always achieved by trapping more "heated" air, in the end, Therme provides a bit more warmth.

As you see, the warmth difference is there, but it isn't as big to make you pretty much ignore other stuff. I'd pay at least as much attention to style, hood and personal layering needs.

If you're fit or thin, Camosun's trimmer cut might look better on you. 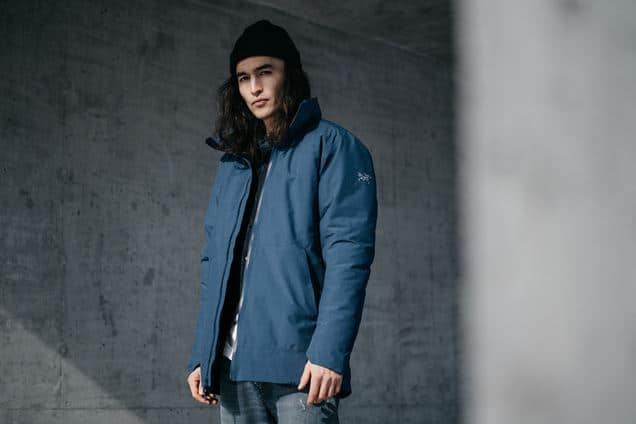 Baggier cut of Therme benefits you in warmth, as I explained earlier in this post, and this is how the baggier cut looks:

Proceed at your own taste...

Camosun's hood is detachable (separate hood) and that of Therme's isn't (integrated hood). This difference in hood construction naturally causes their collar configurations to differ as well.

Camosun's collar is always up, whereas for the Therme the hood should be in use for collar to be standing up straight.

Higher collar is typically expected to block more wind, and I'm not saying this is incorrect. But even when the Therme's hood isn't in use (e.g collar isn't standing), you can still zip it upwards and raise it to a position that's as high as that of the Camosun's:

Still, though, it won't feel as comfortable as the Camosun's collar. This is why they're both equally great in terms of blocking wind when the hood isn't in use, but Camosun is more comfortable.

On the other hand, when you need more wind protection, Therme's collar will reach up higher when the hood is in use: 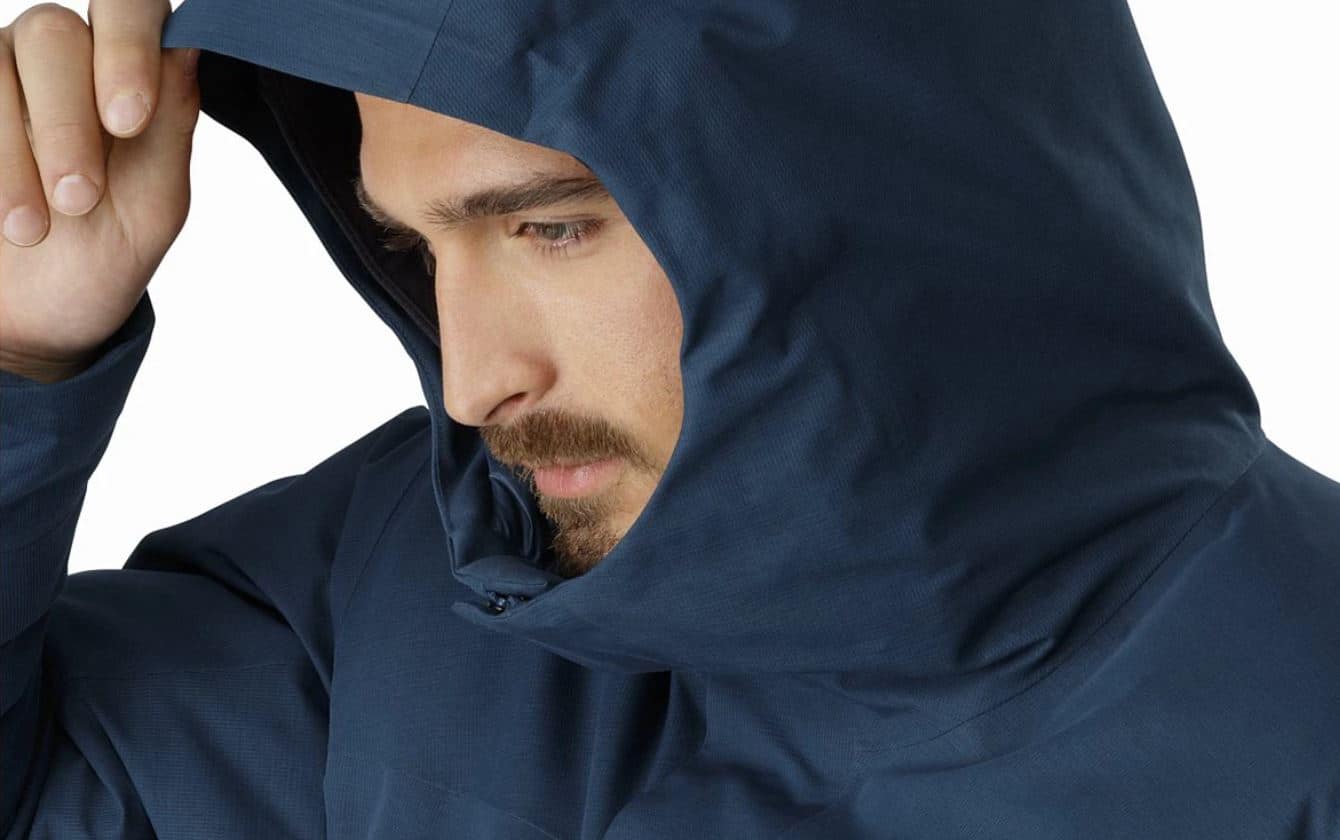 If you can picture some situations where you'd prefer the hood removed, then that obviously is going to be an another advantage for the Camosun.

What about the Outer Shell Differences?

This means that the Camosun will feel burliest and Therme the smoothest in your hands. But most importantly, all of them are very durable.

Why does Arc'teryx's site state windproof for Therme and not for Camosun?

Product information on Arcteryx's site is often misleading. I can give you a thousand examples, but even in our current case you can see that the Coreloft density is left unfilled for the Therme. It is, however, equipped with it.

For windproof; all Camosun, Therme and Thorsen jackets are 100% windproof because of their high quality Gore-Tex membrane. There's nothing you should worry about.

That's all you should know about the Therme and Camosun so far.

Now enter my friend Thorsen - and let's get to its review.

It's important to note that the Thorsen would probably come too warm for the above temperature range and set-up. Vast majority of people would likely overheat in it (unless they run quite cold). Because it's designed for freezing temperatures.

...so if you'll be facing a considerable amount of colder days

If you choose to go with option #1, again, it's good to note that Camosun is going to be more restrictive in this situation due to its trimmer fit. I'd probably get the Therme and reap the extra warmth benefits as well.

Although the temperature differences between the Therme and Camosun are minimal, this isn't the case for Thorsen. It's significantly warmer than both of these jackets.

For the vast majority of people, even if you layer Therme or Camosun with another synthetic insulated jacket (such as one of these) they still won't feel as warm as Thorsen by itself.

This is actually stated by the Arc'teryx staff themselves: 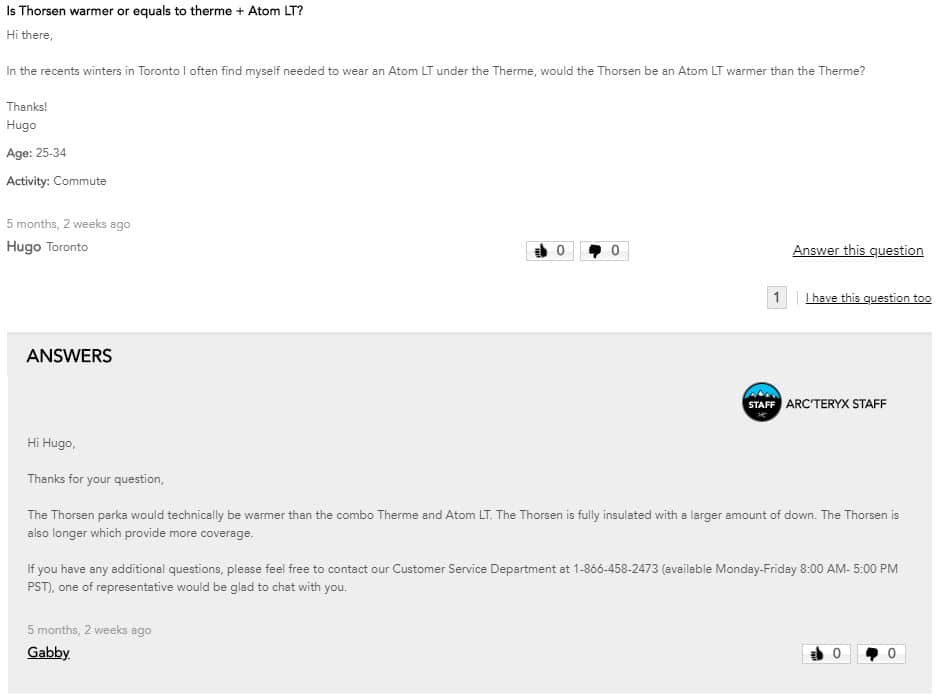 In short, if you want to maximize warmth, Thorsen is the way to go for you. But if you have more $$$ to spare, then layering would give you more versatility. Proceed with your personal needs and desires.

Lastly, all these jackets are DWR coated - which means that they repel water just fine.