The two letter modifiers in the end indicate the different degrees of warmth and weight combination.

As you see, the warmest Cerium jacket is the SV model (severe weather), while the Cerium SL (superlight) is the lightest and the Cerium LT (lightweight) is in the middle.

You can a more detailed guide about these modifiers in Arc'teryx's Naming Scheme Page here - for all "SL", "LT" and "AR" as well as "Cerium".

Click here to check out their side by side spec comparisons on Arcteryx's own site (all hooded options).

Cerium jackets are insulated both with down and synthetic materials. Let's start with down insulation and see how they line up.

All 3 Cerium models in this post are equipped ​with a whooping 850 fill power European grey goose down.

​If you're unaware, this value represents the amount of volume the down fully expands to at rest. The higher the FP (fill power) number, the more air will be trapped and heated inside the down, and ultimately the higher the warmth will end up being. 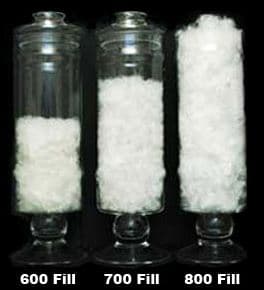 To my knowledge, FP value goes up to 900, and even the most "luxurious" parkas of Arcteryx like Thorsen, Therme, and Camosun use 750 FP down. Less than those of the Cerium's. 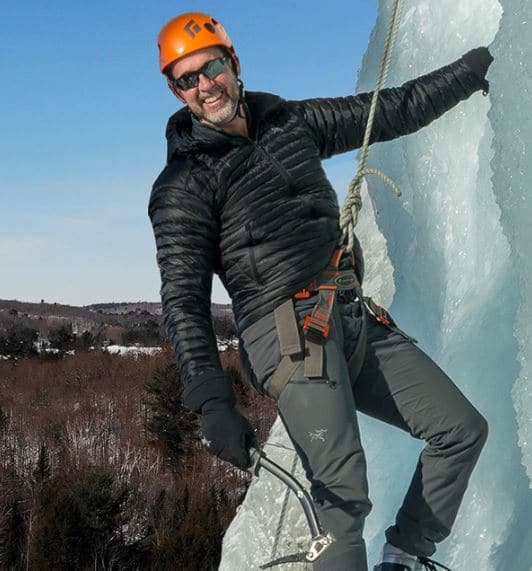 Cerium SL is designed to minimize the weight while naturally having to sacrifice warmth.

However, as you can guess, the amount of down is equally important. It is possible to ensure equal warmth with a lower FP down - it's just that you're going to have to use more of it and hence the jacket will be significantly heavier.

It's the same with these jackets:

This is why SV is the heaviest and warmest, and SL is the least warm and lightest.

In addition to down insulation, the areas of these jackets which experience a lot of movement (such as the armpits) are also equipped with synthetic insulation (This is actually the case for Arc'teryx's all down jackets):

​As a result, insulation loss around these areas (which typically occurs due to down migration) are minimized.

Generally speaking, with only a long sleeved shirt under and without a shell on top, for an average person, during daily use (strolls, power walks, etc) and with enough wind to cause an umbrella to twist in your hand...

Check out their current prices at the bottom of this page.

Part of the baggier cut of Cerium SV results from, again, trying to maximize the warmth.

SV is a little baggier than SL and LT.

​With the baggier cut, more air trapped between your body and the jacket. As a result, more air is heated - which works as a great extra insulation. Many other insulated gear (such as sleeping bags) leverage the same principle.

There are cases where a baggier cut actually comes counter productive since it allows too much air to circulate and hence air can't get heated properly. Some even let the cold air in. But in our case it's done correctly and the baggier cut of Cerium SV perfectly adds to its warmth.

Baggier cut also lets you layer under and still stay equally comfortable when wearing the jacket - which is something to consider.

Both SL and LT come with the identical trim fit. One of their biggest pro is that they fit fantastic and provides exceptional comfort.

This can be another important thing to consider. Outer fabrics are quite fragile.

SV and LT are DWR coated, whereas SL isn't.

DWR is a coating. It's basically sprayed on to the surface of these jackets as a finish. It stands for Durable Water Repellent - which means that both these jackets will "repel" water under wet conditions. Instead of soaking into the fabric, the water will be smoothly slipping down their surface. DWR also decreases dry time.

It's a good thing that both jackets are coated in DWR, but pay attention to the fact that DWR is a coating - meaning that it will wear off over time.

Which is why you might want to invest in a DWR spray such as this one (recommended by Arc'teryx).

This is the main downside to consider with all these jackets - even with SV.

You can say all these jackets are moisture resistant - but not water resistant.

If this is a deal-breaker for you, and hence you'd rather a truly wind & waterproof fabric instead, the reasonable substitutes for each model can be listed as follows:

Checking out this post where we listed Arcteryx's and Patagonia's top synthetic insulated jackets can be helpful as well.

Another option would be to get a hard shell on top. Cerium is a mid-layer line, after all. 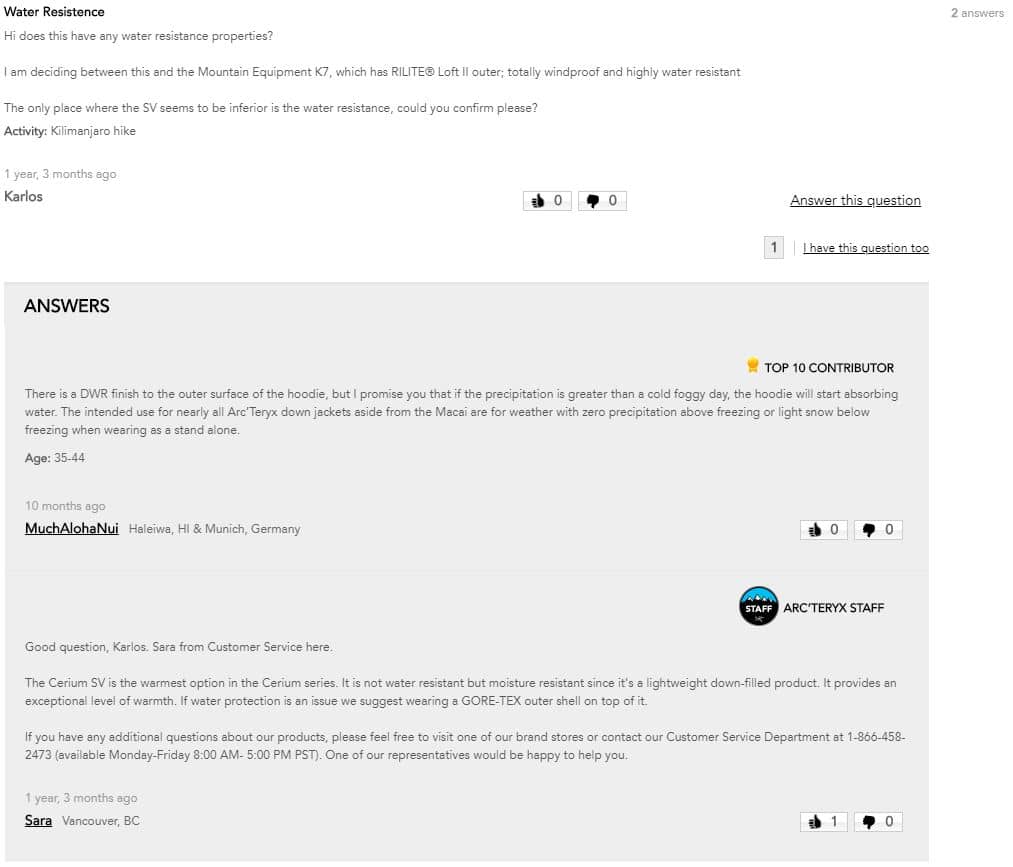 One of the best hard shell options to wear over a Cerium is Beta AR. This is also stated by Arc'teryx staff as well for Cerium LT: 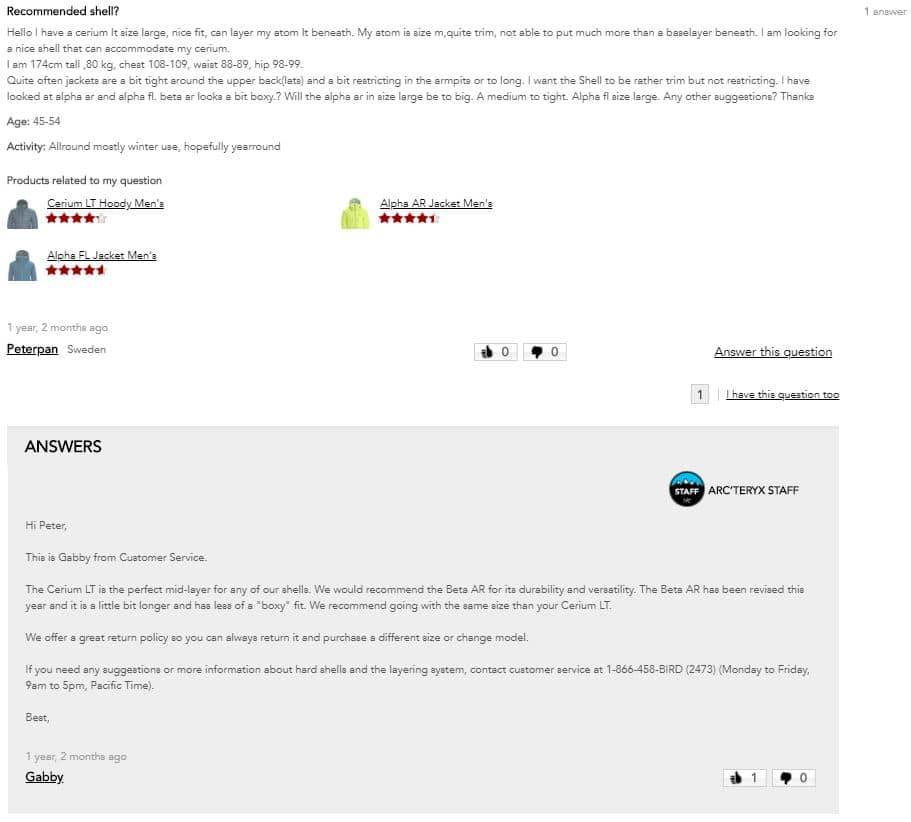 You can read more about Beta AR in this post of mine.

Mid to strong winds may (will) push through the nylon and down layers of all three Cerium models but lighter strength winds are usually blocked.

Cerium LT uses a thicker, heavier and more durable nylon both on the face fabric & lining compared to SL (Arato 10 vs Arato 7).

SV, on the other hand, is equipped with Arato 10 on the face fabric and 7 on the lining.

Still, none of these jackets are really durable as they aren't abrasion resistant. They're meant to wear under a shell in most physically active or foul weather conditions.

That does NOT mean that they can't be worn as a standalone piece, they certainly can, however, you're going to have to treat equally kind to LT, SV and SL.

​They're all fragile. Most complained side of these jackets. Let's hope seeing at least a 30 or 40 fabric in future updates.

If you WILL be treating your jacket fairly kind or get a shell over it, though; you probably won't regret a fragile construction since it won't cause a negative impact.

If you'll experience a fair amount of days with your Cerium below -8 deg C (17 deg F), I'd recommend the Cerium SV: 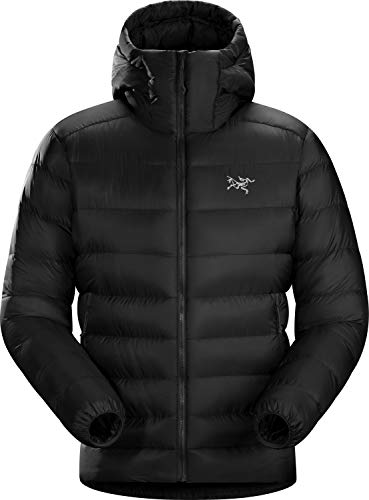 If winters aren't really cold where you live (above -8 deg C (17 deg F)), then I'd recommend Cerium LT over SV because of its fantastic fit and better suitability for high output activities in said temperature range:

If you're planning to wear the jacket mainly in fall and spring (above +5 deg C (40 deg F)) during various outdoor activities such as climbing and hiking, then I'd recommend the Cerium SL: 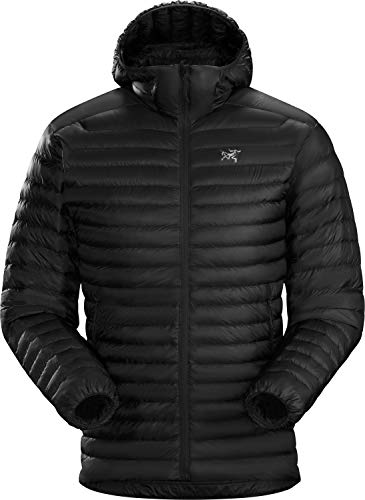 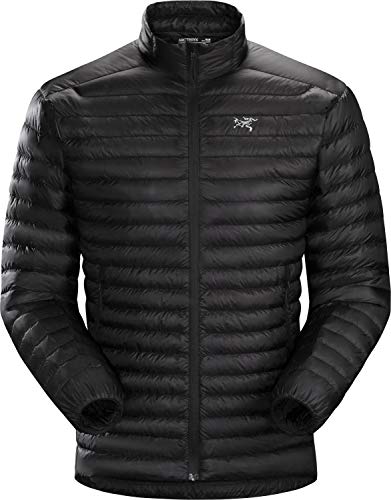