​​To be able to understand the differences between Atom LT and Proton LT products, first we need to clear out the confusion around the entire Proton line.

BUT, the information there can be misleading here and there, so take it with a grain of salt.

Or, in other words... just don't bother with it at all and focus on the info in this post instead... I think I really covered everything you need to know to decide...

Addressing to this confusion is necessary since the Proton line feels somehow "undecided" or "misplaced" to most of us. I mean, before the Proton line was introduced, Arcteryx already had a line of jackets meant specifically for high output activities: The Atom line.

So why the hell would Arcteryx go the extra mile and release a completely new line instead of improving the already existing Atom line?

Some people even look at as if Arcteryx SHOT THEMSELVES IN THE FOOT since introducing two lines of products in the very same lane is rightfully considered counter productive - not to even mention the opportunity cost and the loss of extra time & resources.

You can also see this in their Arc'teryx Naming Scheme Page here, for both Atom and Proton.

What they were really thinking? Did Arcteryx really mess up or did they instead have a greater strategy behind this?

Short answer is yes, they did have a strategy. Actually, not only they had a strategy, to me (this part is subjective), they even achieved their desired results as well.

After hours of research & back and forth talks with the Arcteryx Team, my take is that Proton was the Arcteryx's response to the advances in breathable active insulation and shell fabrics.

This wasn't disclosed by any of the Arcteryx's representatives to my side, but now I'm pretty sure that's the case.

Yes, Atom did have a solid reputation established around the athletic users (which is the target audience), however, Patagonia's newcomer Nano Air, for example, started to receive even better reviews.

Combine it with effective marketing, and the Air quickly started to gain some attraction around the outdoors community, as well as other US based companies. Not to even mention the patriotic side of the events - Patagonia is a US company (a population of 330 million), and Arcteryx belongs to the neighbor Canada (a population of 37 million).

In the end, higher tech products started to receive and slowly increase their shares from this target audience pool, which caused the portion that belongs to the Arcteryx to decrease.

And it didn't look like stopping any time soon.

My guess here is that Arcteryx tested the waters and felt that it almost became a well accepted fact in the community that Atom LT wasn't one of the best active insulation pieces anymore. [A little off-topic: I don't disagree with that statement either as you can see here.]

And the Arcteryx's maneuver to these changing environment?

You guessed that right: Introduce a BRAND NEW line of jackets. NEW means that the quality, performance metrics and characteristics HADN'T BEEN labeled by the market/target audience yet - unlike the Atom series.

We know these series as the Proton line today.

When you think about it, it makes perfect sense as well (at least to me). Why spend your time trying to change people's minds which almost already settled?

I think we all would admit that it's very difficult to fundamentally alter well-accepted facts like these, if not impossible. Arcteryx saw an opportunity to sidetrack, and took the chance.

This is also the reason why The Atom line has seen NO revisions in the time The Proton line has seen TWO. It's also revised in 2019 as well, as you can see the revised tag here.

I hope things fell into its place in your mind now.

In summary, Proton line was Arcteryx's response to advances in breathable active insulation and shell fabrics in general.

It should now be much easier for you to wrap your head around comparing Atom LT to Proton LT.

I tried to lay out all the outcomes here in this post in a non-technical language that anyone can (hopefully) understand.

In summary; compared to the Atom LT, Proton LT provides higher breathability, weather resistance and durability; without any noticeable sacrifices in the warmth department.

Attention here guys! Arcteryx revised the Proton LT in 2019, and the information in this post isn't applicable to the previous revisions.

​I've also put this post together for the comparison between all the popular Arcteryx and Patagonia mid-layers, including the two in this post.

So if you're interested to see how well these two jackets scored in the warmth, comfort, weather & abrasion resistance, breathability and style departments; check that out as well.

Let's begin with the updates in the new Proton LT, and then we'll get to the Atom vs Proton.

The intention behind the revision Proton LT received in 2019 was to make it an even higher air-permeable insulated piece - in order for it to be able to compete against the Patagonia's Nano Air.

In order to increase breathability, designers decided to change the insulation material from Fortius 40 to Fortius 20. In English: Fabric is now slightly thinner but also more air-permeable.

This is measured with a metric called CFM (cubic feet per minute). The new Proton LT has a CFM of 40 compared to the CFM of 20 that belongs to the older version.

Because the Coreloft Compact of the revised (new) version is composed of highly crimped fibers, it's more compressible and air-permeable compared to the Coreloft Continuous of the previous version.

The Coreloft Continous, on the other hand, has more fluff at the beginning (so slightly higher CLO value - which means slightly warmer) but can pack down over time meaning that the jacket will eventually lose some of its fluff and warmth a little bit.

We can say that the warmth didn't really change noticeably (if at all).

Continuous is also more durable since it's less air-permeable.

*New Proton LT on the mission.

Since the design intent of Proton LT is a highly air-permeable jacket for high output activity, design team decided to switch to Coreloft Compact for air-permeability and packability reasons.

Fit of jacket didn't get a revision with the updated model.

Compared to the previous model, the most recent (2019) version of Proton LT is;

Now let's get to the differences between this 2019 version Proton LT and Atom LT.

Coreloft of Atom LT is more thermally efficient and less air-permeable. That's why it'll breathe less and hence, technically speaking, it does provide more warmth - even when you count in the effect of Proton LT's longer hemline (which increases its warmth).

For a stationary use, it seems like this could be an advantage that Atom has over Proton for some of you. However, in practice, the warmth difference isn't noticeable at all. It wouldn't even be inaccurate to say that the difference isn't little, and that it's flat out non-existent.

The face fabric of Proton LT is more abrasion & weather resistant than that of Atom's. Proton's smoother surface also feels softer and more pleasant in your hands.

Compared to Atom LT, having more resistant face fabrics, Proton LT is more suitable to be worn as a standalone piece (without any extra layers) while climbing, ski mountaineering, etc.

Also, both jackets are DWR applied.

The two takeaways here are:

THIS is what you want to ask here:

How much of a cold weather would either one be able to resist to?

Due to the subjectivity and somewhat vague nature of these metrics, this is very difficult to answer, if not impossible. It also depends on so many factors: Wind, layers, fit, humidity.

And did I say subjectivity?

To give you a rough idea about the warmth they'll provide (without any extra layers) none the less... with only a long sleeved shirt underneath:

Check out the warmth chart I shared above for more in-depth information.

...is the most noticeable difference between these jackets.

Especially with the updated (more air-permeable) version of Proton LT, now it's even more noticeable.

It uses actually breathable insulation and fabric, unlike Atom LT's fleece side panels.

Which brings us pretty much to the conclusion:

Because of the reasons laid out, Proton LT works the best with high output activities (such as power walking, biking, climbing, trekking etc) and excels in moisture management and heat control.

The Atom LT is also an excellent jacket to wear during high physical activities, but you can think of it as a tad inferior model of the Proton LT. You're going to have to vent more often with it.

So I'd recommend getting the Proton LT.

For a stationary use...

You can get either one.

I, for example, really like the way Proton LT looks and the extra weather resistance & durability that comes with it - more than the little sacrifice made in the weight and warmth departments.

So I'd personally still get the Proton LT.

Let's mention some other details about these jackets.

Neither of these jackets stuff into its own pocket. Just so you know.

Proton LT offers a little longer hemline than the Atom LT - which is better. 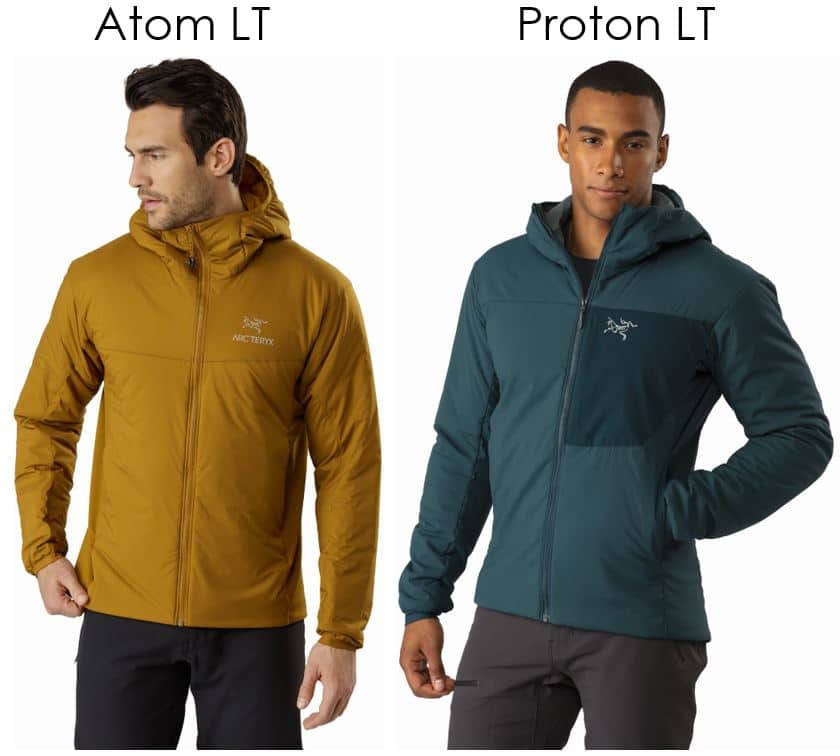 In the looks department, Proton LT is more of my taste than the Atom LT.

Overall, the fit of the Proton LT is also a little trimmer but not as much to make it easier to layer.

I'd recommend layering either of these jackets with Arcteryx's own Beta AR jacket [Read Review].

In short, I'd recommend the Proton LT over the Atom LT for almost all cases. Think of Atom LT as a tad inferior alternative of Proton LT.

If you prefer videos, here's a good review of Atom LT:

That of Proton LT: