These are both great stoves which can handle multiple types of fuel and will last through some nasty conditions. They've both been on the market for some time and it can be confusing which one is better for you - so I tried to answer this as clear and in detail as possible in this post.

In summary, while MSR Dragonfly is a more powerful stove and has some cooler features, MSR Whisperlite Universal (NOT International or Classic) is (probably) the most versatile stove on the market that’s also really powerful and way quieter.

In this post we'll compare MSR Dragonfly and MSR Whisperlite Universal on the basis of fuel types, size & weight, efficiency and comfort - but I also included other Whisperlite variations in the table below for easy "scanning". There's also another heading devoted to Whisperlite International vs Universal comparison at the bottom of this post.

You also get the option to choose liquid fuel and canister fuel with Whisperlite Universal, which would make it my go to for both shorter getaways and longer trails. 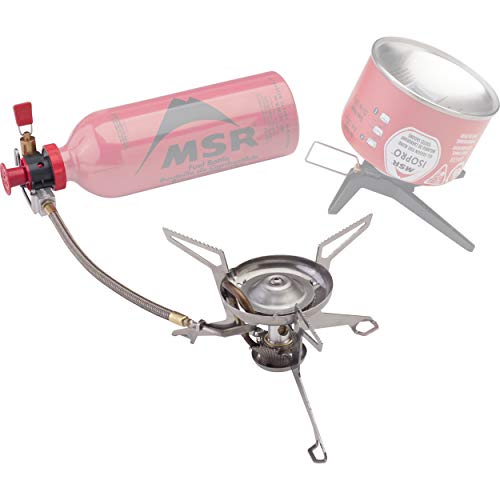 The truth is, Dragonfly is just too loud and bulky for the wilderness. While it’s certainly powerful, durable and great for complicated meals, you can achieve the same results with the Whisperlite Universal.

You might still want to consider Dragonfly if you don’t really care about the noise and you're going to cook for large groups and want really easy simmer control. 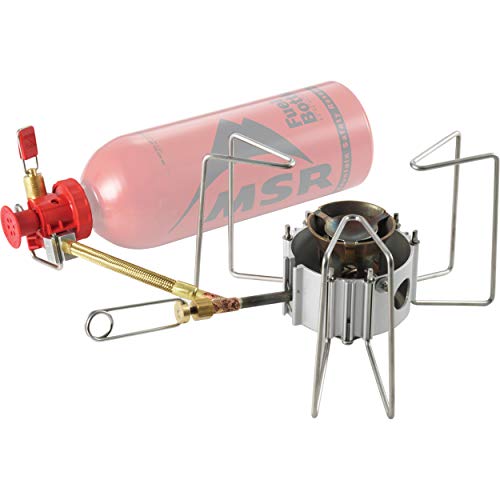 Now let's get down to the bolts and nuts.

This is one of the best thing about these stoves. They're compatible with a lot of types of fuels - especially Whisperlite Universal.

Camping stoves are classified depending on the types of fuels they use. The three main groups are liquid fuel, pressurized canister and alcohol stoves [1]. They each have their ups and downs. We are interested in the two liquid fuel stoves: MSR Dragonfly and MSR Whisperlite. Liquid fuel stoves are generally more durable than the alternatives, they are also way more powerful both in terms of how fast and how much they provide heat. Even though canister fuels are great they don’t perform as well in colder weather as they sometimes sputter when the temperatures drop. This isn't an issue for liquid fuel and it provides you with constant, reliable heating power [2].

Typically the main fuel source for liquid gas stoves is white gas. It's a naphtha product and it's a liquid (unlike the name).

It's the same thing as white gas! It is just marketed by the Coleman Company.

Both of these stoves can also readily burn kerosene and unleaded gasoline. MSR Dragonfly can also use diesel and jet fuel. While white gas is handier, you might appreciate these alternatives if you travel abroad.

MSR also makes these fuel bottles that fit the pumps of Dragonfly and Whisperlite. They are refillable and they come in three sizes: 11, 20 or 30 oz.

For best quality, MSR recommends MSR IsoProTM fuel. It’s a high quality blend of 80% isobutane and 20% propane. It comes in 4, 8 or 16 oz. cans [3]. I took this photo in Naturkompaniet when I was in Sweden, but you can also order it online on MSR's site or on Amazon.

We’ve been discussing it as a liquid gas stove but it’s officially classified as a hybrid fuel stove! You have the option of taking canisters to your weekend getaway and liquid fuels to a colder and longer trip.

The Whisperlite valve that attaches to canisters keeps them upside down for stronger and more consistent output – even when the can is almost empty!

MSR has this great introductory video on how to use liquid gas stoves. If you're inexperienced with them, you might want to check it out:

The top two technical properties of a stove is how fast it boils/heats and how much fuel it uses [4]. The two key words are fast and efficient. We will compare them on the basis of three properties: burn time, boil time and water boiled.

The second criteria is boil time, it’s the time it takes to boil 1 liter of water from room temperature to 100°C. Both Dragonfly and Whisperlite Universal do this in 3.5 minutes for white gas. Dragonfly produces better results of 3.9 minutes compared to Whisperlite’s 4.4 minutes for kerosene. Both of these products are not as fast but more efficient when used with kerosene. They take longer to boil but fuel also lasts longer.

When we take a lot at these technical specs, we see that MSR Dragonfly is more powerful and faster. However, note that both of these stoves are really powerful and dependable when used in colder temperatures.

First thing to note: Neither of these stoves are truly lightweight. They aren't necessarily for a solo backpacker but more for car camping, a large group or an expedition. Dragonfly is 1 lbs. 1.8 oz. and Whisperlite is 14.9 oz. This isn’t an insignificant weight when you're backpacking and every ounce counts. However, the Whisperlite is slightly lighter - meaning a slight advantage over the other. I'd recommend you to know how to pack your backpack the optimal way because you probably aren’t going to find a lighter hybrid/liquid gas stove than Whisperlite Universal (except other Whisperlites!).

If you decide to go with Whisperlite you might want to commit to a type of fuel per trip and leave the other contraptions at home for a lighter pack!

Another thing to note on the weight department is that, even though these stoves are heavier, you get to control the amount of fuel you carry. Unlike canisters where you have carry in discrete units even if they are almost empty, the liquid fuel tanks are refillable. You have the option to fill it up the exact amount you need. MSR Blog has a good article about it here.

Another great aspect of these two are that they are field-serviceable meaning that you can take care of any issue that arises in minutes. They are easier to take apart, clean and reassemble than other stoves.

Both come with a small parts kit which is for minor problems. MSR also makes more applicable expedition repair kits that are sold separately.

If you're using diesel, kerosene or unleaded auto fuel that weren’t intended for stoves, certain small particles might clog the pipes. Both Dragonfly and Whisperlite Universal are made with ShakerJet technology which is essentially a needle you can shake to clean the insides of the stove.

There are detailed instructions and videos on the MSR website and on their YouTube channel for detailed maintenance tips. Both of these stoves also come with an instruction manual that details how to properly use and take care of your valuable stove.

You can checkout the maintenance video for DragonFly:

There is a similar style maintenance video for Whisperlite Universal and International:

These two stoves are quite similar in terms of how easy it is to take care of both them. These beasts are really built to last you for over 20 years and with proper care they would.

We didn’t think noise would be a point in comparison for fuel stoves – but it is! The MSR Dragonfly is loud, like really loud. It’s almost not even possible to have a conversation when the Dragonfly is in full blast. In comparison, the MSR Whisperlite sounds like a “whisper”.

The loudness of MSR Dragonfly can really annoy your fellow campers after a long day on the trail. Especially when you are in the middle of the woods, trying to escape the chaos and sounds of the city the last thing you want is the sound of a roaring fuel stove.

I personally think this is actually an important point and Dragonfly really gets some negative points for this problem. However, if you are going to use it in an environment where the noise doesn’t matter that much and or the power of the stove is the determining factor Dragonfly is still a great option.

The designs of Dragonfly an Whisperlite are quite different and even though they can perform similar tasks interchangeably, they excel in different things. First of all, both of them are larger than other stoves which creates a more stable cooking setup. Especially if you have larger pots and pans that you use for your group both of them stay stable on the ground. Dragonfly especially is very stable due to its tripod shape and large legs. You can also check my best backpacking frying pans post to see which one would work for your stove or open fire.

Dragonfly also has an extra windscreen around the fuel cup that provides extra protection without the separate windscreen. Both of these models come with a separate aluminum windscreen that greatly decreases the consumption of fuel in windy/colder weather. Besides functioning as a windscreen it concentrates the heat released from the fuel cup to the pot/pan above.

This is a major plus for Whisperlite Universal because other stoves that use canister fuel tend to perform pretty badly with wind as they usually don’t have - and can’t be used with - windshields.

The best ability of Dragonfly is its ability to simmer, the dual valve at the side allows you to control the heat just like your stove at home. It’s possible to cook a variety of meals ranging from pizzas to sauteed vegetables. While instant noodles is enough for a day trip, eating a range of meals becomes more important if you're on an expedition or if you're camping for fun with friends and want a bit more luxury. Whisperlite Universal is also pretty good at simmering especially when used in canister mode. However, for good simmering and flame control when used with liquids you need to master the technique a bit.

Whisperlite Universal may not have the large legs but it also has stainless steel tripod legs that are very stable. Not having the bulky legs means that it becomes more compact when packing. It also has great pot rests with grippy teeth that prevent anything from sliding down. This is a great improvement from the previous editions of Whisperlite.

Whisperlite Universal comes with an adapter and stand for the canisters and the classic pump for liquid fuels.

The truth is, Dragonfly is just too loud and bulky for the wilderness. While it’s certainly powerful, durable and great for complicated meals, you can achieve the same results with the Whisperlite Universal. You might still want to consider Dragonfly if you don’t really care about the noise and you're going to cook for large groups and want really easy simmer control.

Below video for Whisperlite Universal from MSR can also be a good watch for this comparison:

And this one for Dragonfly:

There's also Whisperlite Classic that we didn’t discuss here. It’s slightly heavier than Universal and International and it can only burn white gas. While it's really a classic that deserves the fame, the newer models improve on the classic and are the better choice. The classic also doesn’t have the jagged wire potholders and other design improvements.