Jetboil Minimo and Flash are both great stoves but with different design intentions.

We'll compare Jetboil Flash and Minimo on the basis of:

But again - they're designed for different uses! So it comes down to what you're looking for - and you probably won't find anything considerably better than these stoves for their exclusive best uses.

Jetboil Minimo is one of the most versatile stoves out there. Although slower than Flash in terms of boiling water, it's still pretty fast. Its simmering ability allows precision cooking even at temperatures as low as 20F (-6C) - which is considerably better when compared to Flash.

Unless you're going to be boiling water only with your new stove or 1.5 oz of weight is a deal breaker for you, I'd recommend Minimo over Flash without a doubt. 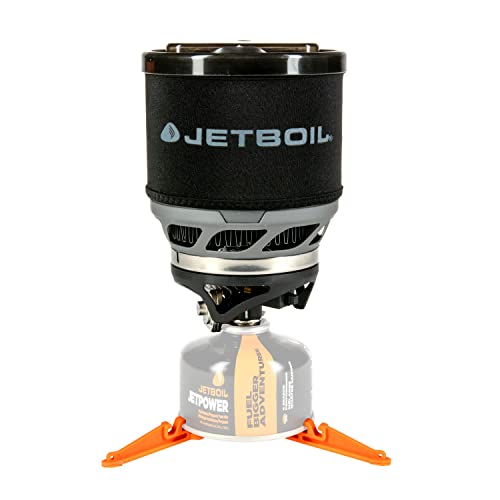 Jetboil Flash is meant for boiling in SECONDS instead of minutes. It's solely designed around the purpose of providing the fastest and easiest way to boil water and hence its name. This is also why it lacks in terms of cooking meals - it doesn't have a fuel regulator.

The sacrifice comes with this much of an effectiveness is that when compared to Jetboil Minimo, it isn't even nearly as good at simmering. If you're looking for a stove for both simmering & cooking meals AND boiling water rather than boiling water only, go for Minimo.

Sure, it isn't end all be all and you can still precision cook with Flash - but for this purpose, it just can't compete against Minimo.

If you're going to be boiling water for dehydrated meals, coffee, and tea only; Jetboil Flash can be a perfect choice for you. 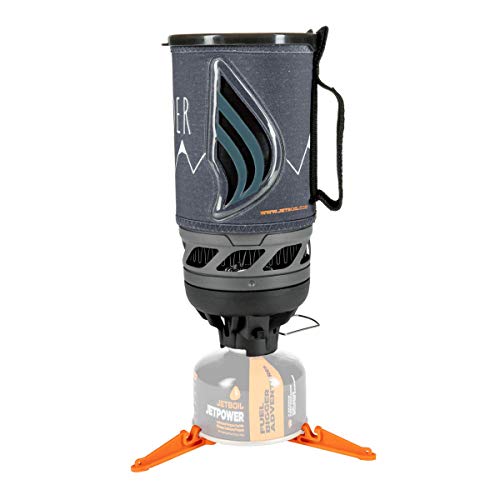 Now let's get to the bolts and nuts.

When it comes to fuel efficiency, Minimo is so much centered around it that it makes even Flash look bad - which is also pretty good at it compared to other stoves in the market.

The main cause of this difference is the FluxRing.

The efficiency gap between these two stoves grows even further in windy conditions. Since Flash is taller and is equipped with a narrower burner than the Minimo, its efficiency decreases even further (more on this later under the versatility heading).

Both stoves work with Butane-Propane Gas mixture under vapor pressure, and both are used only 100g/230g/450g Jetboil Jetpower Isobutane/Propane Gas Cartridges only [see the manuals in the table at the top].

Beware: These canisters are sold separately (you don't get any of them with either of these stoves) and can be purchased on Amazon: 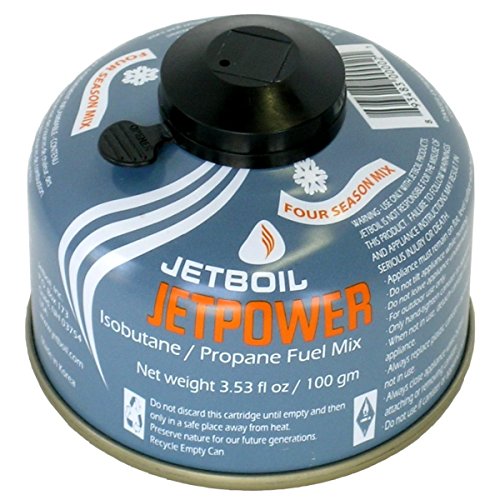 If you want your canister to be packed into the pot as well, go with the smallest one!

Short answer: Yes you can use MSR Canisters with Jetboil Stoves.

A little longer answer is:

As you see, MSR IsoPro fuel contains Isobutane/Propane Mixture - which is compatible with Jetboil Flash & Minimo [see the manuals in the table at the top]. It’s a high quality blend of 80% isobutane and 20% propane. It comes in 4, 8 or 16 oz. cans. I took this photo in Naturkompaniet when I was in Sweden, but you can also order it online on MSR's site or on Amazon.

Some might say, hey, 75 seconds of difference isn't a big deal and I don't have problems with this argument. It's just that you should know that these numbers are just an average.

If you're a 4 season hiker, during the winter the difference can increase too much because of more severe environmental conditions - not just cold but also the wind - and it might start making a noticeable difference. As a result, if you go for Minimo, you might end up wishing having a super rigorous stove with you instead.

It's also better if you're planning to go after meals and drinks prepared with hot water only. I have an article on camping foods prepared without cooking or need to refrigerate, but there are lots of dehydrated meals I've placed there, so it can be a good read if you're one of them.

Also... this is actually the reason behind why Flash is less fuel efficient. You need to consume A LOT of gas to be able to boil water in only 100 seconds. It's great for more serious thru-hikers, but not optimal for, say, myself, a recreational hiker.

Before moving on I should also say that Flash is better by far only in perfect conditions. In a windy weather (say, more than 6-8 mph) Minimo boils the water FASTER than Flash (more on this later under the versatility heading)!

First things first: Neither of these stoves are truly lightweight.

At 14.6 oz (Minimo) and 13.1 oz (Flash), their weight ballpark had been considered light for many years. But then, other brands such as MSR, EtekCity, Primus and Snow Peak came up with very compact and much lighter stoves. Including the pot, Pocket Rocket 2 weighs as low as 10 oz (see my Jetboil Minimo vs MSR Pocket Rocket comparison for more information).

That's why, in today's world, I can't really say Minimo and Flash are in "lightweight stoves" category although they're regarded as such by some. Also, this is the major disadvantage of most Jetboil stoves out there - not just Minimo and Flash.

If this is a deal breaker for you and you'd prefer going with the best lightweight and compact stove in the market, I'd recommend you to check out MSR Pocket Rocket 2: 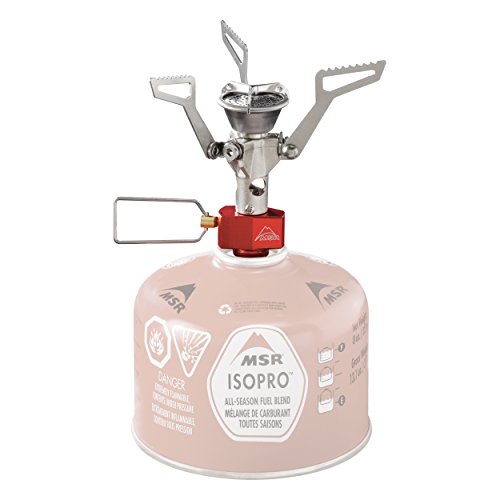 Still, this doesn't mean Minimo and Flash aren't necessarily for a solo backpacker but more for car camping or a large group or an expedition. They're being used perfectly fine by thousands of people for almost a decade.

Also, do make sure you know how to pack your backpack the optimal way for a better weight distribution and you should do perfectly fine.

Now here's how to pack them into their pot & how they end up measuring.

Diagram belongs to Flash. Click on image to enlarge.

Both Minimo and Flash can be easily packed up into one small unit as you see above. Another tip here: If you want your canister to be packed into the pot as well, you'd better go with the smallest one.

As you see, Minimo (at right) is shorter and fattier compared to Flash when packed.

It's plus points for both stoves that you can fit the entire assembly into the pot.

I didn't give extra points to Flash just for being 1.3 oz lighter because chances are this is a very, very minor difference for 95% of you. I call it a draw for this criteria.

This is one of the most important things you should know when you can't decide between these two stoves (which is why I repeated it many times until this point): Minimo is much better at simmering than Flash. In fact, you don't even have the option to simmer in Flash because it isn't equipped with a fuel regulator. It's made to get liquid hots as quickly as possible.

If you're unaware, this means that you can't adjust the fuel intensity once the water is boiled.

As explained in the first heading, Minimo was already superior than Flash in terms of fuel efficiency, so Number 2 helps with it even further.

Flash comes with a color changing heat indicator at its body. The indicator basically fills up to indicate how long it's until the water is boiled:

It's meant to provide more versatility but ended up being a huge waste of money for the users IMO. Minimo doesn't have this feature.

For other accessories, check out Jetboil's site for Minimo and Flash.

Another thing to mention in terms of versatility is the winter conditions. The problem comes with it mostly isn't the cold but the wind.

Flash (at right) is equipped with the original burner which is more narrow compared to the revised burner of Minimo. You can see the width difference even in the table in the introduction. As a result of the width, core of Minimo is guarded better than the Flash.

In addition to the width, as I illustrated many times earlier Flash is considerably taller than Minimo, which causes it to tilt very easily in the wind. Combine these two reasons together and you see why Minimo is marketed as a 4 season stove, whereas Flash as a 3 season stove. Regardless, I'd recommend guarding both stoves out in the rather windy (more than, say, 6-8 mph wind) environments.

As a result, Minimo works better than Flash in the wind - even in terms of boiling speed! If you're looking for the best backpacking stove in the wind, you might be better clicking over to the MSR Windburner: 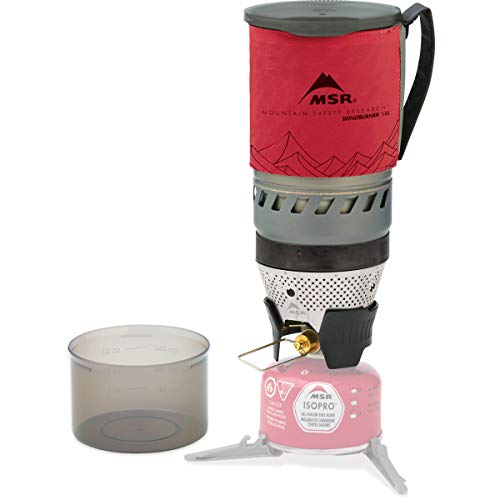 In summary, the winner for versatility is Minimo by far - which is the main difference between these two stoves.

In my opinion, whatever Minimo very slightly lacks in boil speed compared to Flash, it makes up in its versatility, fuel efficiency and simmering ability. Without a doubt I'd recommend Minimo over the Flash for 90% of us.

The truth is, Flash is just too niche and inflexible for 90% of us. While it’s certainly effective, durable and great for just boiling water, you can achieve the same results with Minimo if you compromise the boil time a little - and in addition, you get to simmer and use a canister for longer due to increased fuel efficiency.

Still, if you literally have no plans to simmer, it's probably one of your best choices out there.