These are only approximate values assuming typical settings. If you think you;

...then always opt for the more cushioned option when in doubt.

Olympus 4.0 updates deserve its own post as it's a total makeover. It's arguably the best Olympus they've built so far.

Although this Green/Orange color of Olympus 3.5 is really liked by many (including me) the design game also seem to have picked up a lot with the 4.0: 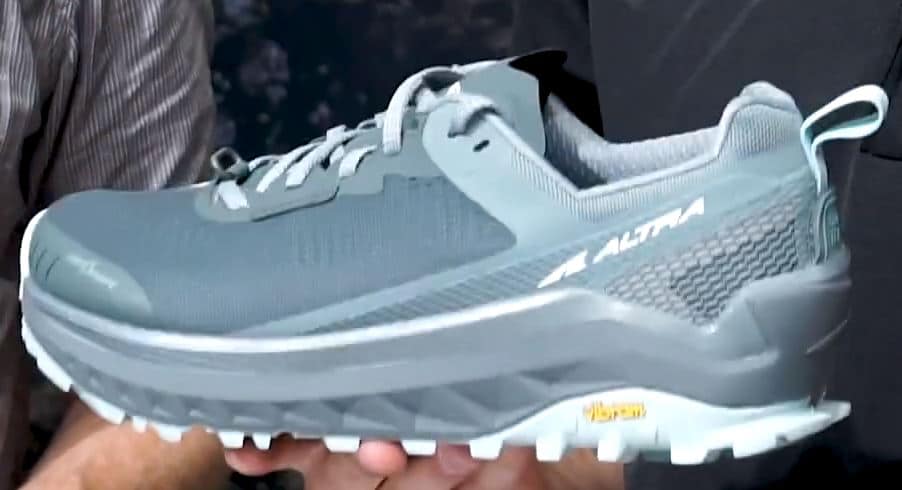 For folks who are unaware, Olympus is Altra's most cushioned trail running shoe. It's initially designed for 100+ mile (160 km) ultra marathons, but ample cushioning is equally beneficial when you're either actively walking, standing or hiking for long periods of time.

In these cases, you're likely to wish a lot of cushion and underfoot protection beneath your feet - which Olympus had always filled the bill for that matter.

But the really high cushioning isn't the best for your joints in many cases, and what's more you're inevitably forced to sacrifice some traction capabilities and weight as well.

Olympus 4.0 seem to zero in on these weak points brought by extra cushioning. Its Vibra Mega outsole offers much better traction capabilities now compared to the previous revision: 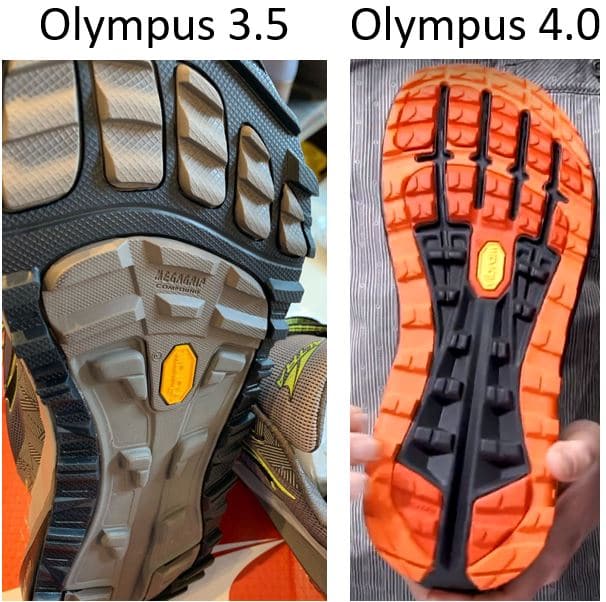 This is the most important update that took place.

With Vibra Mega outsole, the lugs now are much more aggressive compared to the previous revisions, promising more security on slippery terrain.

Vibra Mega holds on to the terrain more securely than the previous MaxTrac technology of Altra. In a way it "sticks" to the ground and provides great grip.

Another thing that might have caught your attention on the outsole is the vertical channel starting from the heel and reaching out to the midfoot.

This split in half adds to Olympus' flexibility, allowing it to move more freely in lateral axis and hence providing extra independent lateral suspension. This means that;

Weight, foot protection around the toe-box and breathability seem to be other improvements.

"How's it going guys I'm Connor from running warehouse today I'm here with Golden Harper founder of Altra and we've got the latest update to the Olympus series this is the Olympus 4.0 now just looking at this shoe this is a beast of a trail shoe a lot of cushioning great traction what is this shoe all about who's this gonna who's the type of runner using the shoe so if you understand the way cushioning works it's not great for your joints but it's very protective for your feet so anybody who's gonna beat their feet up long hours on your feet we we originally intended this shoe when it was first built for ultramarathons 100-mile races etc and that's still really the you know purist intent of this shoe but anybody who wants a lot of cushioning for whatever reason trying to protect their feet this is gonna be a great option for them great now looking at this shoe it's all new from top to bottom can you tell us about some of the updates yeah so total makeover on the Olympus far and away in my opinion the best Olympus we've ever built it's you know it's 33 millimeters thick it's 11 ounces it's got a Vibra Mega grip outsole so it's going to have an incredible traction to it we have you know split the the shoe in half basically to give it independent suspension so if you hit a rock on one side it's not affecting the other side of the foot as much less likely to roll an ankle nice and wide and stable at heel and forefoot independent suspension lugs in the front so when you hit a rock it can deflect into the shoe without you know throwing you or or messing up your ride as much engineered mesh upper is really breathable lightweight drains quick it's got a nice protective toe cap on it with drain holes built in so that every time you take a step any any water that's coming to the shoe can find its way out and then of course our gaiter trap that we put on all of our trail shoes as well to be able to attach our gaiters to and those are the biggies right so this shoe is going to be a beast when you're going long and far on the trails you're looking at this on your feet when can you have it so this is going to be a Summer 2020."

I hope this post was helpful for you to learn more about the trail running shoes in your mind.

Trail running shoes are currently on SALE at REI!

Go to REI's Trail Running Sale Page to see all the discounted items (up to 60% OFF).