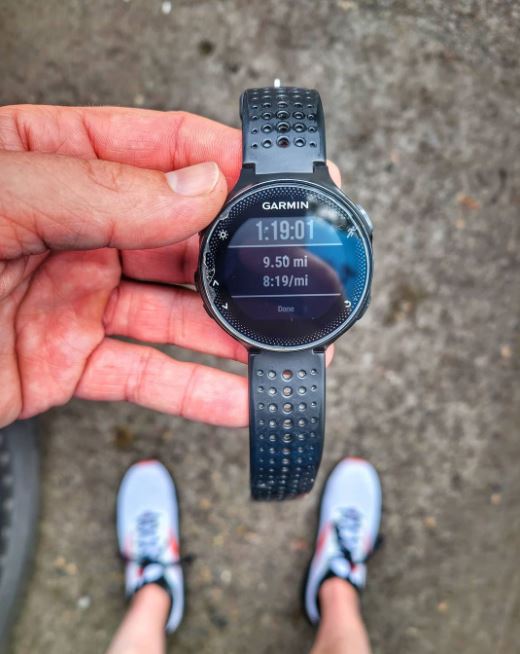 They’re the same watch, except the 235 has some major upgrades with the HRM, tracking, and Android/iOS compatibility. Plus it’s more comfortable and comes with Garmin Connect.

Wondering if the Garmin Forerunner 235’s upgrades are worth the extra money?

I spent a full week putting them head-to-head on the road, trail, exercise bike, and treadmill to bring you the definitive answer.

Read on to find out. The answer might actually surprise you.

If you wear them every day, you’ll notice a clear difference.

The Forerunner 225 is an awesome watch, and one of the best running watches for intermediate to advanced runners.

But the 235 has a few key upgrades that make it a superior watch, especially for people who run every day like I do.

The 235 and the 225 are nearly identical, except the 235 is more comfortable, has a sharper display, is more accurate, and is compatible with Android/iPhone.

By the end of the week, after wearing the sharper, more comfortable 235, I actually struggled to finish my workout with the 225 on. And after exercising 18 hours total, the data from the 235 was more helpful (I’ll explain later).

If you plan to exercise regularly, it’s a no-brainer decision. Since prices have come down so much, you’ll pay a few bucks more for features that will make your work out more enjoyable and fruitful.

Don’t just take my word for it, though. Let’s see them side-by-side. 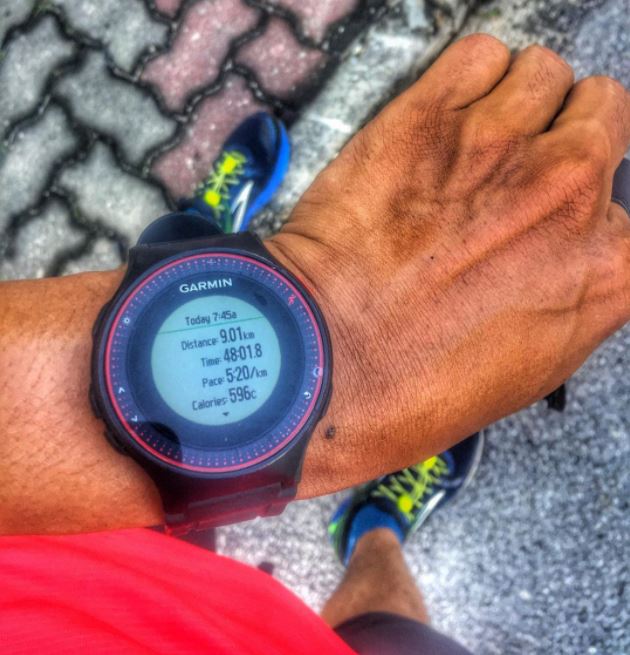 The Forerunner 225 is an awesome watch, and one of the best running watches for intermediate to advanced runners.

I don’t know about you, but I loved the Garmin 225 like it was part of my family. I wore it all day every day. I forgot it was even there actually.

My girlfriend used to joke that it was like an engagement ring (sigh - hint?).

The wrist-based heart rate monitor was a gift from heaven, and the iMAX display was heaven itself.

But as a runner who makes a living in this industry, I had to try it…

And wow was I wrong

The 235 has some pretty sweet upgrades.

You might want to take a look at the manual of Forerunner 225.

Garmin cut the weight down by 10g and width is 4.5mm thinner. That doesn’t sound like much, but wearing the 225 is like running with an extra Sharpie permanent marker on your wrist. When running or swimming, every little bit matters.

When you wear your watch all day every day (like me), you notice.

#2) The screen is noticeably better

The 235’s screen is a noticeable step up:

It’s 20% sharper, which is actually really noticeable when running. You don’t have to squint as hard to get a clear reading, and it’s way easier on the eyes when checking out your metrics post run. It’s nowhere near the Apple Watch yet, but it’s nowhere near in price either.

It also comes in handy when reading your smartphone notifications.

Wait, did I mention that?

This is something totally new in the 235.

Now you can get texts, alarms, email notifications, and a ton of other smartphone notifications right on your wrist.

Fair warning - this could actually get really annoying. Use at your own peril. I found that getting mostly spam email notifications while running was a huge headache. Like I wanted to check how far I’d run and the screen was an email notification.

You can turn this off directly in the watch though. Just switch it to “not during activity”, and you’ll be fine.

Garmin added GLONASS, ANT+ compatibility, and route tracking to the 235, so it’s better at knowing what you’re doing at all times.

GLONASS is another global satellite system that kicks in whenever GPS fails, giving you a backup in case you’re in a GPS dark zone (and informing Mother Russia of whatever you’re doing).

Route tracking means you can add a map and follow it. Again, super helpful if you’re ever in a strange area or just trying to challenge yourself. It’s not a super detailed map but it is helpful. 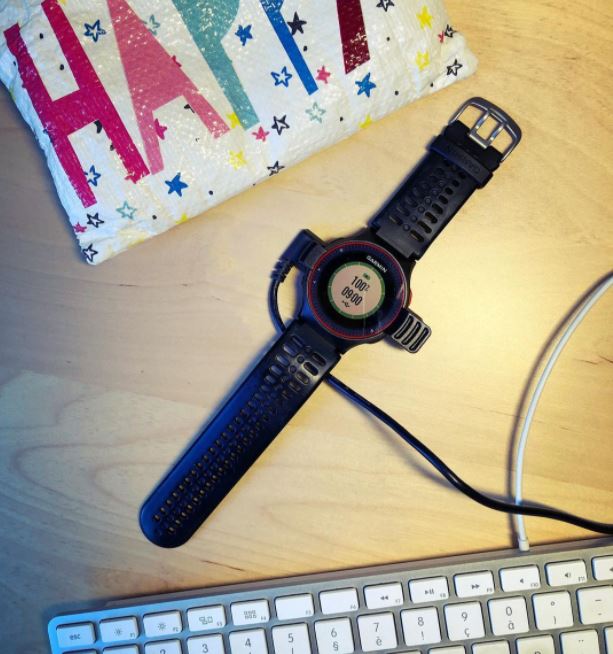 I hate to sound super salesy, but I don’t see any reason to get the 225 instead of the 235 unless you’re on a tight budget.

The Garmin 225 revolutionized running watches forever with its wrist-based HRM.

Garmin Elevate is the single greatest leap forward in HRM tech since the 225 introduced the wrist-based HRM.

The 225 uses MIO, a 3rd-party heart rate monitoring software. Don’t get me wrong it’s awesome. But for the 235, Garmin took things in house and created an algorithm that cuts through the noise and delivers super accurate data...even while you’re not exercising.

MIO’s technology was great at rest, but during physical activity, all the movement, sweat, hemoglobin spikes, and other random events seriously messed with the data.

Garmin Elevate is way more accurate. It emits green light, which your blood’s hemoglobin absorbs differently depending on oxygen content. Elevate uses these fluctuating differences to calculate your heart rate rather than traditional methods. The result? Way less noise!

NOTE: There were major issues with Elevate when it first came out, so you’ll probably see a lot of disgruntled people around the web. But Garmin has released a series of software updates that have put those bugs to bed.

This is maybe the biggest advantage for serious runners, cyclists, and athletes .

Garmin Connect is a powerhouse app with detailed workout plans, custom maps, way more metrics, an awesome dashboard, and auto stats comparison to give you a full picture of how well you’re doing.

Now after I’m done running - BOOM. All my stats are uploaded to the app and I let it work it’s magic. After a few days I’ve got a full picture of how well I did. 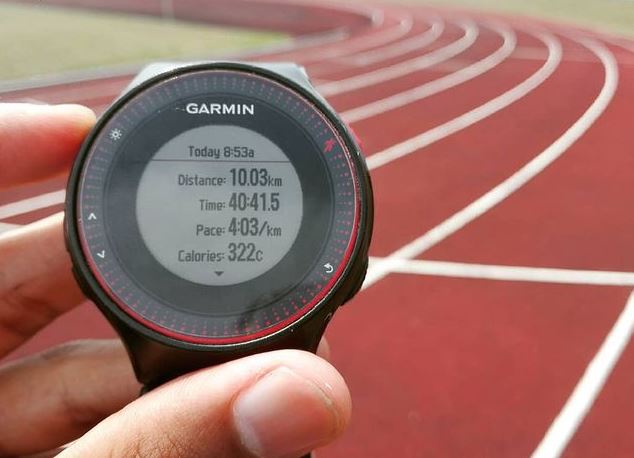 The Garmin 225 revolutionized running watches forever with its wrist-based HRM.

The 225 and 235 are extremely close. Think of them like twin brothers, except one is slightly bigger, smarter, and more athletic.

There’s a lot in common here.

Check out the manual for Garmin Forerunner 230/235.

I spent a week exercising with both. Here’s what I think:

Honestly, they’re both extremely easy to use. Just click one of the 5 buttons and everything else is pretty self explanatory. Everything is right on the display. You really can’t mess it up.

If I had to pick a winner then obviously the 235 because the display is sharper and easier to read. But that’s the only difference here. 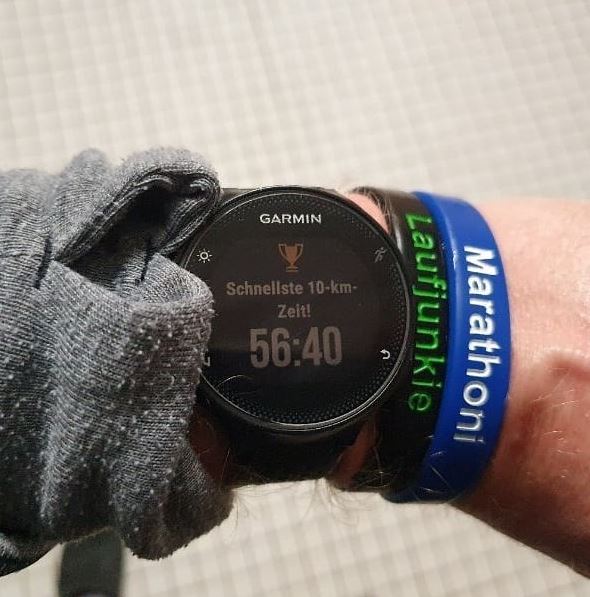 This is where 235 breaks away and takes the gold.

I noticed the difference in comfort quickly and it’s great to have the app synch my data and give me an overview after each run or weekly. Now I can see what I’m doing right and where I need to pick it up. NO EXCUSES!

The lighter weight and thinner display make a noticable difference. The 225 used to make my wrist turn bright red and get sore after wearing it 24/7. You know when you finally take off your watch and there’s that giant silver dollar imprint on your arm?

I didn’t really get that with the 235. Some yes. But not that much. It definitely feels lighter and more breathable on the arm. 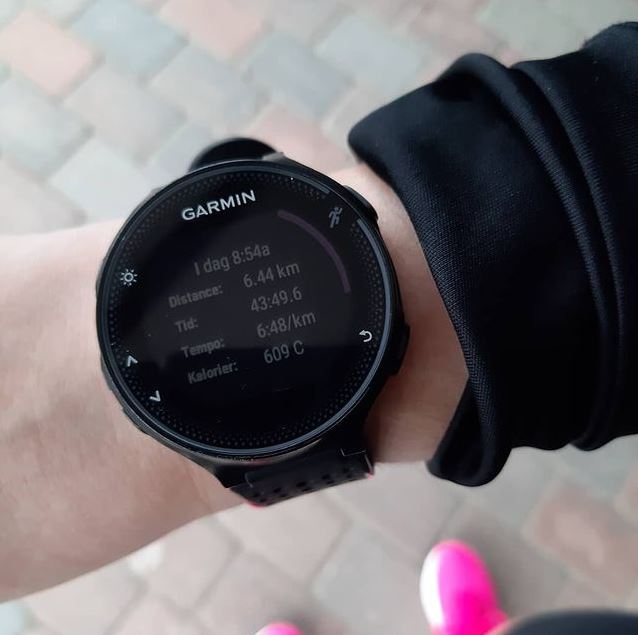 If I had to pick a winner then obviously the 235 because the display is sharper and easier to read.

I’m a running geek, so I love all of the new features in the 235. You might not get as excited as me, but they’re definitely a lot of fun.

I play around on Garmin Connect daily, and evaluate my stats in my down time while binging Netflix. The add route tracking, app, resting heart rate, and other features are a ton of fun. Definitely worth a few extra dollars. The 225 will eventually limit what you can do. With the 235, there’s no limit.

I hate to sound super salesy, but I don’t see any reason to get the 225 instead of the 235 unless you’re on a tight budget. They’re the same watch, except the 235 has some major upgrades with the HRM, tracking, and Android/iOS compatibility. Plus it’s more comfortable and comes with Garmin Connect.

If it were $200 more then it’d be a debate. But since they’ve both come down in price over the years, there’s no debate.

Hey, what's up? Canberk here. I try to approach outdoor gear from a scientific point of view. Here's more about me.