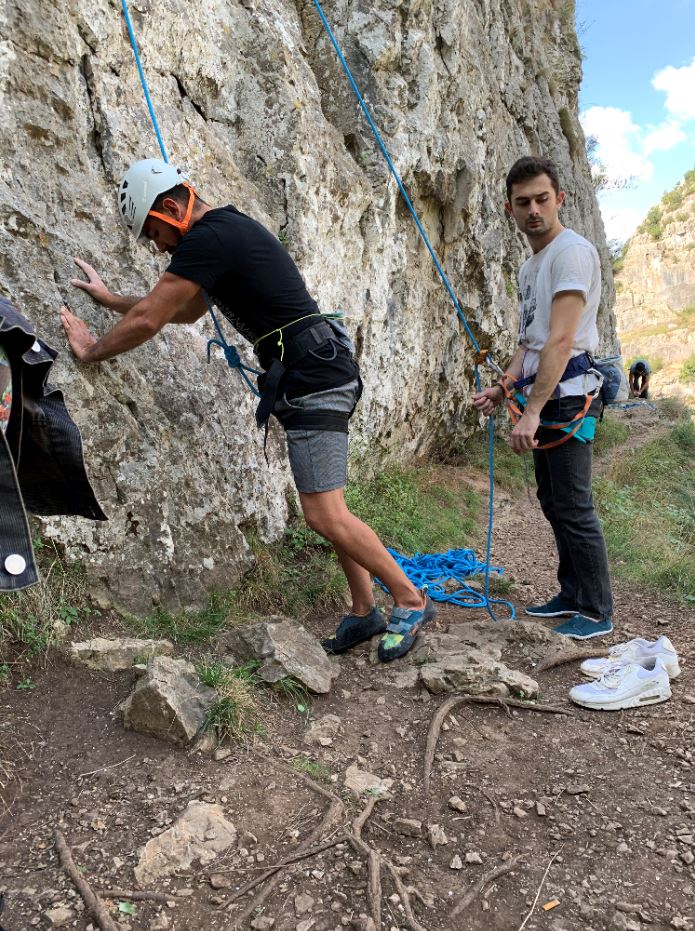 Us climbing in Ballıkayalar, Kocaeli, Turkey.

Recent years have put the issue of climate change in a more serious light. Melting ice caps, rising sea waters, struggling animal species—these are just some of the common montages that we see in documentaries and discussion boards whenever the topic is brought up.

​But what we don’t often see⁠—and realize⁠—is how climate change has escalated to a point that its impacts are now felt on a more personal scale. For people who live and breathe adventure, this comes in the form of escalating danger levels of outdoor activities like hiking and mountain climbing.

​Figures can help put this in a better perspective. In 1987, a woman died on a hiking trail in Alaska after she was crushed by a 1,000-pound chunk of ice while taking a photo at the foot of Exit Glacier in Kenai Fjords National Park. This could have been easily ticked off as a case of ‘being at the wrong place, at the wrong time,’ but succeeding figures of similar accidents say otherwise.

​In 2005, 18 people died in Kang Guru, Nepal after they were caught in an avalanche caused by unusually heavy snow. In 2018, another woman was crushed by a falling ice ceiling in Byron Glacier. In a sick twist of events, more and more bodies that have been buried under the snow of Mount Everest are now showing up as its ice caps start to melt.

Climate change and the dangers it brings

It’s undeniable: climate change has come to finally catch up with us. The global phenomenon, which can be described as an intense changing of the planet’s climate system, has caused usually impenetrable walls of ice to melt and collapse, crevasses to shift, and rocks to move.

This can be especially felt in mountain hiking trails traditionally covered by snow and lorded over by harsh climate. Other mountain rockfalls, moreover, have also suffered from increasing freezing altitudes and rising temperatures.

But it’s not only the melting ice that hikers have to worry now. From originally just trying to avoid slippery slopes, they now have to prepare more for weather changes that they might face along the way. Is it going to snow harder? Will the temperature drop or rise? Nature has been so hard to read in the first place, and now it has become even more tricky to deal with because of how unpredictable it has become.

Changing the experience of mountain climbing

The changes can also be felt in how park and trail management work now. For example, Kenai Fjord’s Exit Glacier is now closed every summer to protect hikers from possibly falling rocks, snow, and ice. This change has greatly affected the whole mountain climbing experience in the area because the base of this ice wall used to be the only glacier that is accessible by road.

The problem is that not every mountain trail management has solid safety precautions set in place. Around the world, inexperienced and under-equipped people get injured by wayward accidents on trails. This is especially so in areas that are not as popular and well-managed as other climbing sites. And this does not even cover casual hikers and daredevils, a lot of whom don’t even secure the proper equipment and/or guidance, before going on their adventures.

In addition to the higher chances of accidents, climate change is also making the act of climbing and hiking more dangerous in itself. When the ice melts, more rock gets exposed, making the trail even more difficult to traverse. The reason behind this is because when water freezes, it expands and causes cracks on the rocks. While permafrost can hold the broken pieces together, it is a different case when the ice starts to melt. The thawing of ice sheets can cause pieces of rock to roll and fall on unwitting climbers, not to mention make the trail itself unsuitable for hiking.

Climate change has, without a doubt, started to affect some of the world’s best peaks. The Alps, for example, is reported to have some of its best peaks start to crumble, making its trails even more dangerous to traverse. Popular mountains in the US like Mt. Baker and Mt. Rainier have also suffered from thinning ice which has resulted in more open crevasses. Routes are being closed. Once trusted mountain hiking guidebooks are now being rendered useless.

Moreover, the flora and fauna in mountain trails are also feeling the punishment of climate change. In Switzerland’s peaks, for example, marmots are pushed to wake up earlier during their winter hibernation because of the change of weather. Alpine plants are also moving upward as the ice starts to recede. Note that the root system of these plants can also be a driving factor behind falling rocks since they cause more cracks on the already unstable rock bed on these trails.

With mountain climbing becoming riskier than ever, it has become even more necessary for people who are into this activity to follow precautions that can keep them safe during their climb. And it’s not just hikers who have to take action. Hiking trail management offices also have to exercise better control of their routes, closing risky paths and re-assessing their routes. Trail guides also need to be revisited since what might have been the condition a decade ago might no longer be applicable in the present landscape.

Hikers, on the other hand, need to practice more caution when choosing their hiking trails. Always do intensive research on a location you plan to visit. Trail guides may be outdated, but checking recent hiking discussion boards⁠—or even a simple hashtag relating to the landscape⁠—can give you a better idea of what to expect. Also, do not go anywhere that has not been advised by the trail management. You might be there for an adventure, but be smart enough to assess the risks, too.

Actively discussing the effects caused by climate change in mountain hiking is by no means a way of telling outdoor enthusiasts to stop doing it. However, it is a necessary conversation to have if we want to keep this hobby alive and its hobbyists safe from possible dangers. Bottom line: climate change is no longer something we can ignore. In fact, it has come to finally meet us at our planet’s highest peaks.